KIDNEY DISEASE IN DOGS OR CATS 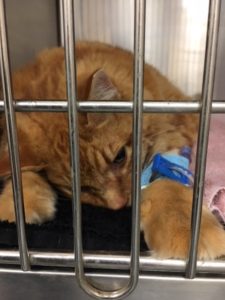 We wanted to make this post about kidney disease since it is one of the common diseases that we deal with here at Windward Animal Hospital.

First I thought it was important to define the actual term disease since so many people have come to misuse or misunderstand the word.

Disease:  A pathological condition of a part, organ, or system of an organism resulting from various causes, such as infection, genetic defect, or environmental stress, and characterized by an identifiable group of signs or symptoms.

If you are suspicious that your pet may have a kidney problem, it is important that you act quickly and bring them in for a check-up.  If it is a problem, the sooner treatment is implemented, the more likely your pet will have a better chance of recovery.

Healthy kidneys filter the blood thereby removing waste products from the circulation. When your pet’s kidney function is diminished, waste products in the body start to accumulate, causing your pet to become sick.

occurs suddenly and is often caused by toxins, infections and changes within a pet’s body that reduce the blood supply to the kidneys.  Sometimes it is externally caused, example; the cat or dog eats something toxic to them and it causes ARD.

occurs over a longer time. It is often a consequence of old age, but some breeds of dogs and cats have an inherited tendency to develop CRD at an early age.

If a pet’s kidneys are damaged from Acute Renal Disease, Chronic Renal Disease can be a consequence.  Sometimes, viruses, bacteria, or toxins may be the cause and CRD can be a consequence of diabetes mellitus, high blood pressure and many other internal diseases.  These diseases lead to Acute Renal Failure (ARF).  This occurs when kidneys are failing or have failed, and they can no longer remove toxins. The kidneys are shutting down.

Many things can cause acute kidney failure. Certain poisons are well known for their ability to damage the kidney. These poisons include antifreeze (radiator fluid, ethylene glycol), lily plants (cats only), raisins and grapes, and certain drugs including pain pills such as aspirin or ibuprofen (Advil® or Motrin®).

Severe infections in the kidney from bacteria can cause sudden kidney failure. Although kidney infections can occur spontaneously, usually there is a pre-existing condition that reduces an animal’s ability to fight infection easily (such as kidney stones, partial urine blockage or chronic kidney disease). Leptospira is a type of bacteria that can cause acute kidney failure in dogs, but very rarely in cats. Dogs get leptospirosis from urine or water contaminated by infected animals (deer, cattle, rats, raccoons, mice or other dogs); another reason to avoid leaving food containers outside. You never know what form of wildlife is eating out of the same bowl.

Anything that decreases blood flow through the kidney can cause kidney failure. This includes dehydration from any cause (such as severe vomiting and diarrhea). Heatstroke or other disorders causing massive damage to blood vessels, such as bee stings or snakebites, can lead to kidney failure.

Because the kidneys perform so many functions, the signs can vary quite a bit. The signs may be severe or may be subtle and slowly progress. Some of the more common signs include:

Signs you may see if you examine your pet include: dehydration, weight loss, pale gums and ulcers in the mouth.

The initial treatment for acute kidney failure is intravenous (IV) fluids. These fluids are used to restore good hydration and to flush out the substances that the kidneys should be removing from the bloodstream. Urine production is monitored throughout the IV fluid therapy as a decrease in urine can indicate the need for other therapies.

The condition of dogs and cats with acute kidney failure can change rapidly. Careful monitoring is necessary. This may include repeatedly checking blood pressure, body weight, electrocardiogram and blood tests. It may be necessary to place a urinary catheter to measure urine volume.

Fluid retention may occur if urine production is less than IV fluid input. This may manifest itself as increased body weight, belly bloating, swollen legs, or shortness of breath if fluid builds up in the lungs.

Not all animals with acute kidney failure will respond to IV fluids. Advanced renal therapies (peritoneal dialysis or hemodialysis) may be necessary. Signs that indicate these therapies should be considered include a dangerously high potassium level, fluid in the lungs or lack of improvement in laboratory results while one receives IV fluids. Peritoneal dialysis involves placing a tube directly into the belly cavity then pushing fluid into the belly, which is later drained out. This flushes out many toxins the kidneys are failing to remove. Initially, this procedure requires a doctor or nurse 24 hours a day to keep flushing the fluid in and out. Unfortunately, even in the best of circumstances, complications such as infection around the tube and clogging of the tube are frequent after only a few days.

Despite all the advances in treatment of acute kidney failure, it remains a serious and often fatal disease. About 60% of dogs and cats with this disease either die or are humanely euthanized because of failure to respond to supportive care. Dialysis is usually reserved for those patients in whom medical treatment has failed, and the chance of death without dialysis is almost 100%. In those patients, 50% may recover with dialysis, depending on the underlying cause of kidney failure. Even in patients that recover from acute kidney failure, the recovery may be incomplete, leaving the patient with chronic kidney disease that will require ongoing care.

For more information on this subject, call our office (770)569-7298 or speak to the veterinarian who is treating your pet.